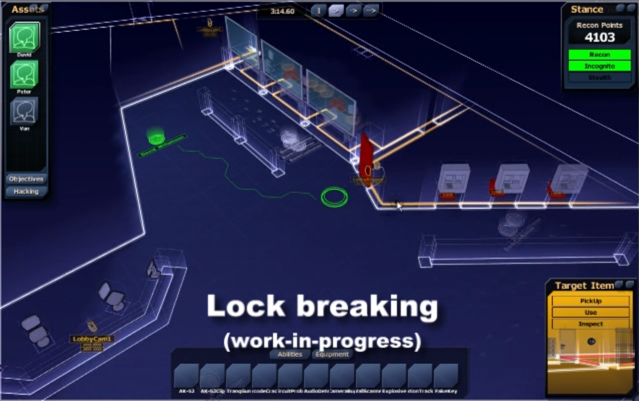 Subversion uses blueprint-like graphics to simulate a world in which you play a team trying to infiltrate buildings.

This is the first footage that they've released and accompanies a post where developer Chris discusses how he decided on a pathfinding algorithm:

Writing a system wrongly is often the best way to learn how to do it right.

Path finding has been a great example of this. I've written two pathfinding systems in my life : one for the static world map of Defcon, and another for the numerous maps in Multiwinia. Both games used a pretty crude method which I was never entirely happy with, solving route-planning the same way the internet routes messages between distant routers, and for Subversion I knew i'd have to solve it properly.

The world is rasterized onto a 2d grid. Walls produce solid grid cells that cannot be walked through. Navigation uses A* across the grid. It does use a lot of memory and there's a practical limit on how large the world can be, but it's perfect for Subversion. It can support dynamic scenery such as using shape-charge explosives to blow a hole in a wall (you simply change the relevant cells in the 2d grid), and it can support dynamic obstacles by simply rasterising them onto the same grid. Best of all, producing the 2d grid is extremely fast and error tolerant - I basically don't need to worry about navigation again.

There's more detail in there about optimisations they've used which help you appreciate what's happening in the video.